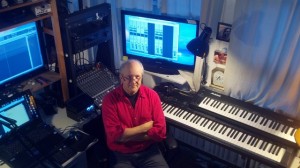 Since the mid 70’s Ted Timreck has specialized in portraits of artists for PBS and anthropological programming for the Smithsonian Institution.  He holds a research position at the National Museum of Natural History in the Anthropology Department and he has worked extensively with Smithsonian scientists documenting field research, producing video and electronic media for the National Museum along with independent programming for public and cable television.  He is the producer of the Smithsonian’s Arctic Studies web site.  Television works include “Franz Boas” for the PBS Odyssey series along with “The Lost Red Paint People” and “Vikings in America” for PBS (Nova).  He is a recipient of the Peabody Award and his television portraits of artists (PBS national specials and American Masters series) include, Charles Ives, Thomas Eakins, Augustus Saint Gaudens and Frederick Law Olmsted.  Recently he has completed a multi-part series called Hidden Landscapes that tells the story of early, Eastern Native American sea cultures and offers a radical perspective on the ancient history of North America.